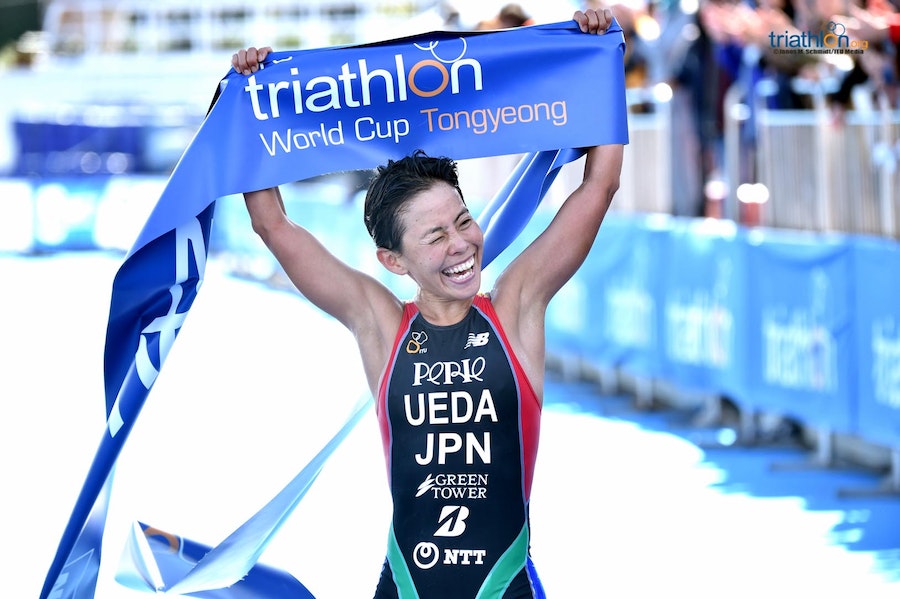 A mix of class and emerging talent took to the stage in the elite women’s race for the 2018 ITU Tongeong World Cup. 51 women lined up to contest, across a challenging sprint-distance course, for World Cup glory.

Switzerland’s Max Studer produced an impressive performance, capped with a sprint to the finish, to claim his first ITU World Cup title.

Elite women’s race report
A mix of class and emerging talent took to the stage in the elite women’s race for the 2018 ITU Tongeong World Cup. 51 women lined up to contest, across a challenging sprint-distance course, for World Cup glory.

After the women completed the 750m swim in the harbour, Lotte Willms from the Netherlands, clocked the fastest swim in 9-minutes and 34-seconds, to lead the elite women into transition.

Kaidi Kivioka from Estonia produced the fastest transition and entered the bike course first with a trail of women riding behind her.

In the early stages of the bike course, a group was established and included all of the race favourites. Japan’s Ai Ueda, New Zealand’s Nicole Van Der Kaay, Hungary’s Zsofia Kovaks, America’s Renee Tomlin and Italy’s Annamaria Mazzetti were placed comfortably in the combination.

Despite the challenging 3-lap bike course, nothing separated this group of women who entered the second race transition together.

The bid for glory was still up for grabs as the expected strong field of runners headed out to tackle the 5-kilometre run course, which included 2-laps of the notoriously sharp hill.

It wasn’t long before Ueda made her move, after the hill grind, and took control of lead position with her dominant run form.

No other women in the field today had the leg power to chase down or match the experienced Japanese triathlete, who was out in a league of her own.

Ueda, celebrated her 35th birthday yesterday, stormed across the finish line to win the race and was finally presented with the gold medal here at the ITU Tongyeong World Cup.

The Japanese triathlete was thrilled to step up onto the top of the podium after claiming consecutive silver medals here in Tongyeong in 2016 and 2017.

“This is the first time that I have got a top place on the podium in Tongyeong, I am so happy. Thank you to everyone, yesterday was my 35th birthday so this is a big present for me,” Ueda said.

Dodet produced an impressive overall race performance to be awarded with the silver medal.

“I am very happy about this. It was a really hard race on the bike and on the run. I tried to follow Ai Ueda but she’s a very strong runner,” Dodet said.

“It’s always a good day when you get on the podium and to be back racing.

“I tried to push the pace a bit. Those girls definitely kept us honest and had us chasing,” said Tomlin.

Visit the website to review the elite women’s results.