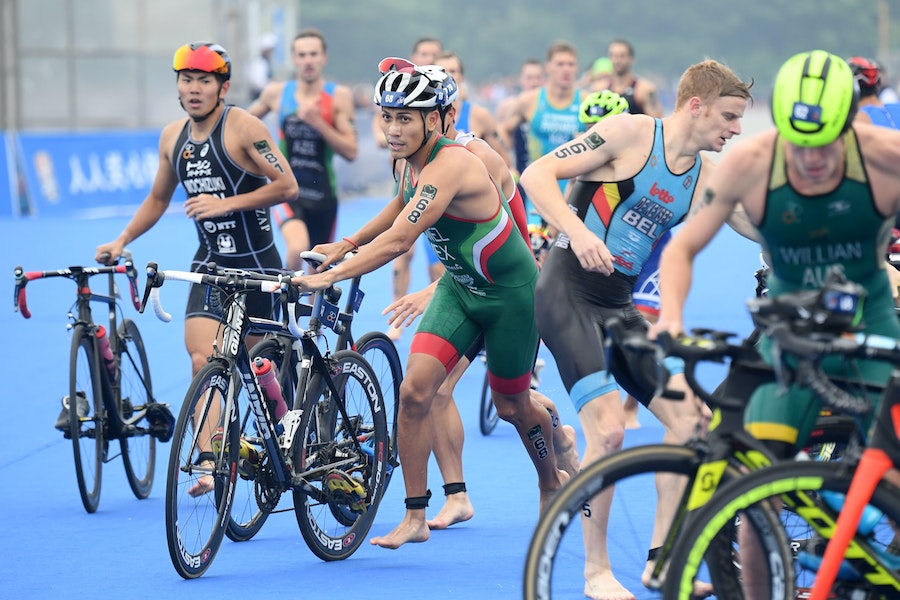 A video showcase from the elite men's semi final action in the 2019 Chengdu ITU World Cup.

Men’s recap
Heat 1
Hungary’s Bence Bicsak claimed top honours and was the first of the elite men to qualify for the final in Chengdu. Japan’s Takumi Hojo, USA’s Seth Rider, Australia’s Matthew Hauser and Mexico’s Irving Perez were the next men through to tomorrow’s World Cup showdown.

Hauser, Rider and Hojo commenced the final stage of the race together but it wasn’t long before Bicsak, who claimed seventh place recently in the World Triathlon Series in Bermuda and known for his running strike, was able to close the gap and take the lead.

“I pushed hard on the run even though I know the final is tomorrow, I felt good.’ said Bicsak.

Heat 2
Germany’s Valentin Wernz displaying a powerful race combination and was the first athlete to secure a spot in tomorrow’s A final in Chengdu. Wernz has had a strong start to the racing season with a World Cup podium finish in Mooloolaba in March.

“I made it into the final tomorrow and that was my goal, I had a pretty average swim which meant I had to work on the bike but as soon as I was on the running course, I knew I could make it,” said Wernz.

USA’s Ben Kanute took control of the swim and led the elite men into transition.

A chaotic chase out on the bike course, with the likes of Wernz playing catch up, saw a mass group of runners stride out on course together.

Unfortunately, Mexico’s Rodrigo Gonzalez, the top seeded elite male leading into today’s semi-final, was battling illness and was unable to perform to the best of his ability, missing a place in the A final.

Athlete tactics and race strategies come into play across this type of multi race format and Australia’s Kye Wylde commented on how his approach was to race smart in order to make it through to the final.

Japan’s Makoto Odakura led the group out of the 750m swim and into transition. Out on the bike Ward, Wilde and Gregor Payet from Luxembourg set the pace and entered the run course together.

“I just wanted to play it safe and make the final,” Wylde said.

The final three spots to make up the 30-man roster for the final on Sunday were earned by Kanute, Israel’s Roee Zuaretz and Max Stapely representing ITU.

The remaining men who finished in the 32nd-61st position will compete tomorrow in the ‘B’ final.

Women’s recap
Heat one
Germany’s Laura Lindemann was a woman on a mission today as she dominated across all three disciplines of the semi-final in Chengdu. Closely behind was Russia’s Alexandra Razarenova and Hungary’s Zsófia Kovács

“I am happy to win the semi-final and let’s see what happens tomorrow. I like the course and it’s a really exciting format,” said Lindemann.

In the early stages of the run it was Lindemann who was charging in front while Razarenova and Kovacs sprinted together, running shoulder to shoulder.

Heat two
New Zealand’s Sophie Corbridge went full steam in today’s second heat to come away with the win. Belgian’s Valerie Barthelemy was second to cross the line with Australia’s Romy Wolstencroft confidently making it through to the final as she crossed the line in third.

“I am really happy to qualify for tomorrow. The idea was to go out with a hard swim and a hard bike and that’s exactly what I did. When I got a gap, it meant I could cruise the run and save energy for tomorrow,” said Corbridge.

2019 Chengdu ITU Triathlon World Cup finals will take place on Sunday, May 11, with the elite men’s A final start at 10.15am (local time) and the women following directly after at 11.05am (local time).