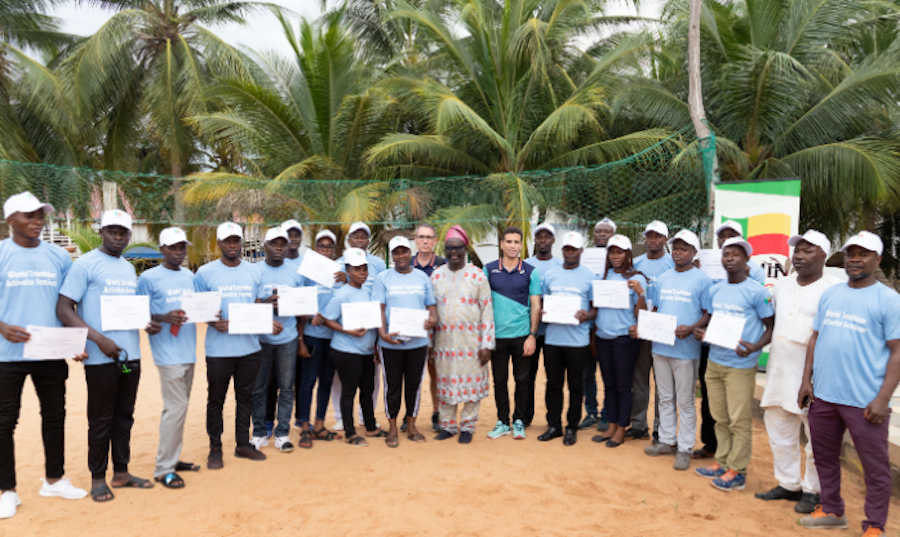 World Triathlon is pleased to announce the signature of the Development Grant contracts with the five Continental Confederations for 2022. A comprehensive and extensive plan that will be implemented throughout the world to support the athletes, coaches, technical officials, events and event organisers development, as well as to increase the participation of women in the sport on all levels, from grassroots to elite participation.

“Investing in Development is investing in the growth of our sport, and is also investing in the future. For World Triathlon to have a fruitful and productive relationship with all the Continental Confederations is paramount, and I think these five contracts signed with the Continental Presidents show once again the commitment we all have with the development projects, and helping our national federations, athletes, coaches, organisers and technical officials to continue learning, improve the level of our events and get more athletes, coaches and officials involved in the sport at the top level”, said World Triathlon President and IOC member, Marisol Casado.

Asia Triathlon
The goal of the contract signed with the Asia Triathlon for 2022 is not only to support athletes, coaches and events in the region, but also to increase the female participation at all levels of the sport. Another goal to achieve in the following months is to launch the recently approved World Triathlon Development Regional Cup concept in Asia.

Asia Triathlon will use the funds for a few Technical Officials courses in Lebanon, Jordan, Uzbekistan and Iran, as well as a couple of seminars for event organisers, to try to improve the level of the triathlon hosted in the continent.

Oceania Triathlon will use the Development funds in 2022 to increase the participation of the Pacific lslands in the sport on all levels, as well as to provide the personnel, resources, and budget allocations to support Oceania Triathlon in achieving their strategic development goals and provide a sustainable structure for accessing resources and programmes and for reporting on a quarterly basis for the development projects.

With these funds, Oceania Triathlon will organise two Junior Development Continental Camps, one of them in the Solomon Islands, meant to support the Pacific Games 2023 preparations. The Continental Confederation will also host a Coaches Level 1 course, Technical Officials courses and an Activator seminar.

Funds will also be allocated to support the Test Event 2022 Pacific Mini Games in the Northern Mariana lslands and the Pacific lslands Championships, that potentially will be hosted in Tonga in early December 2022, depending on their recovery post-earthquake.

America s Triathlon’s development budget for 2022 was drawn up considering the current economic situation that the vast majority of American countries are going through, the low or non-existent score of athletes in the World Triathlon Ranking and the aim of optimizing the resources allocated by World Triathlon.

The Development goals in the Continent are to host ten World Triathlon Development Regional Cup events in ten different nations with the participation of neighbouring NFs and link up with athletes, coaches, Technical Officials and events educational initiatives; to provide continuous coach education and certification opportunities; to provide continuous Technical Officials education and certification opportunities; to identify talents from all over America and with the constitution of the Americas Team and allow them to access Continental Cups without financial restrictions.

The funds allocated on the 2022 Contract will be dedicated to support the organization of these ten World Triathlon Development Regional Cup.

Americas Triathlon will also organize Technical Official courses, both in Spanish and English, and will provide funding for the athletes in the Team America.

Africa’s Triathlon’s development budget for 2022 is meant to activate the new NFs and to provide new and emerging federations with resources for development, as well as athletes and coaches support towards 2023 African Games in Ghana and the 2026 Dakar Youth Olympic Games. the goal is also to provide technical support to events in the Continent, focusing on national championships and regional events.

The funds allocated in 2022 will contribute to organise an Activators Seminar in Portuguese, as well as a few seminars for Technical Officials from Africa. Africa Triathlon will also allocate funds to athletes travel subsidies for triathlon and duathlon regional events in Ghana, Niger and Cameroon, and will organise a Junior Development camps in Morocco, Zimbabwe and Senegal, among other courses.